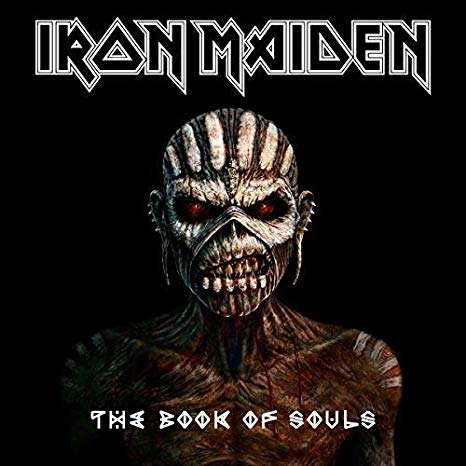 Book Of Souls is a colossal new effort by Iron Maiden. Coming in at 92 minutes, and including their longest ever song, it is not for the faint of heart. The album was written and recorded almost entirely in the studio, meaning there was very little rehearsal time but it could create a more raw, energetic Maiden sound. Unfortunately, it seems that a lot was compromised to gain these features.

The three longest tracks on the album ‘If Eternity Should Fail’, ‘Empire Of The Clouds’ and ‘The Red And The Black’ all have the potential to be great, but fail to deliver. The tracks all fall in to the same trap of having brilliant ideas stuck together seemingly at random to create the longest song possible. ‘Empire’ begins as an epic, orchestral ballad that slowly builds over 7 minutes, drawing you in and captivating you at every moment. Yet they seemingly get bored of this beautiful song and abruptly change to a middle section that could slot in to any other song on the album. And the guitarists break into self indulgent riffs and solos that don’t fit the song at all. ‘Book Of Souls’ manages to mostly avoid these pitfalls and is a great song. It demonstrates that Iron Maiden can still do brilliant long songs, which probably makes it more frustrating that these other lengthy tracks fail to deliver.

There are a couple of classic Maiden tracks on the album of course, listening to ‘Shadows Of The Valley’ and ‘River Runs Deep’ instantly remind you of Maiden masterpieces of the past. ‘Speed Of Light’, the lead single, displays all the trademark Maiden features: catchy chorus line, duelling guitars, awesome riffs. And yet, with the exception of ‘Shadows’ they still somewhat fail to deliver like those tracks of old. It’s reported that Bruce did not know he throat cancer when recording so just carried on, but the results have definitely suffered because of this.

Overall the album is solid, better than their most recent effort, but compared to previous albums it falls some way behind. The overall problem with this album, is that it is simply too long. And I think this problem stems from not having enough time to rehearse, fine hone and really think about the tracks. The tracks with excellent parts are paired with not so good parts; ‘Book Of Souls’ or ‘River Runs Deep’. And there are tracks that are excellent songs, with very few sections that really grab you and astound you; ‘Tears Of A Clown’ and ‘Man Of Sorrow’. And it is a shame because with a bit of thought, they could have paired better sections together, or cut down the overly repetitive chorus or solo sections and this album could have been a masterpiece.

Standout tracks: Book Of Souls, Speed Of Light, (first half of) Empire Of The Clouds.