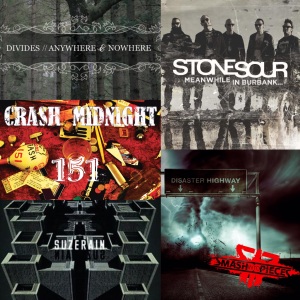 Welcome to songs of the week. This is where I write about some of my favourite songs of the week, new or old. I had a fantastic music week this week, and everything featured this week portrays my rock/metal influences. There are some incredible tracks in there, that I’ll be following up with EP/Album reviews in the near future so, enjoy!

London based five-piece, Suzerain created a really special track in Dark Dark. As the title suggests the track is very dark and ominous; it’s almost conceptual in construction, benefitting from all aspects of the song working towards creating this effect. The whole space created in the first few bars with the tv static, massive open reverb, and sparse texture and instrumentation setting the scene perfectly in a matter of seconds. The verse lyrics are reminiscent of the theme tune to ’90s kids TV show Funnybones, yet work fantastically along side the incredibly tense instrumentation. The tension is never resolved, despite the harmony and textures changing to allow for a more diatonic vocal melody to take centre stage in the chorus. The eeriness climaxes during the dissonant piano solo in the middle of the song and the rest of the song almost seems relaxing in comparison. The song’s theatrically is brilliant and I’m excited to hear more from this band.

Disaster Highway was released in 2014 as the lead single from the band’s second album, Apocalypse DJ, and gives off a really groovy vibe, that I really enjoy. The tracks begins with this really cool, tapped guitar lick, and over the mid-tempo creates the chilled out groove. Despite the textural changes in the verse, the grooves remains present and is enhanced when the drums pick up in the second half. The drop to the half time chorus is a pleasant one as we see the return of the riff backing and the emergence of an instantly memorable vocal melody. The key change in the middle of the song is abrupt and unprepared, but it leads a really interesting texture that provides tremendous contrast from the rest of the song. Overall, the song is really enjoyable to chill out to, I especially like when the guitar riff and energy when the song picks up in the second half of the verses.

Spiders is a fantastic track from Glaswegian rockers Divides, and despite the disappointing production, the fantastic elements of this song still break through. The drums really drive the track; they create the rise and falls that generate so much interest whilst maintaining high levels of energy throughout. The varying drums beats in each section provide contrast and create development within the track, allowing the arrangement of guitars to slot together nicely. It’s the vocals though that take centre stage; the powerful delivery under that thick Scottish accent combine with innovate techniques and effects to create a captivating delivery and interesting melodies. The lyrics are cohesive and depict an excellently crafted metaphor for removing an infectious personality from your life. The chorus melody is particularly effective and is my favourite thing about the track. Definitely worth a listen.
*Special mention to a great acoustic version of the song, found on Youtube*

For Fans Of: Lower Than Atlantis, Deaf Havana, Fall Out Boy
[youtube https://www.youtube.com/watch?v=y04Q0O4AS04]

STONE SOUR – CHILDREN OF THE GRAVE

Stone Sour released their covers EP, Meanwhile In Burbank… earlier this year ahead of two more to follow soon, and Corey Taylor and Co. take Children Of The Grave to a whole new level in their version. Stone Sour definitely benefit from the advancement in production as this track sounds as brutally heavy as when Sabbath perform it live, something that is lacking from the original recording. This version looses a bit of the evilness the original had, especially in the middle when the organ should enter, but this is atoned for in the almost virtuosic drum performance and the new level of gravitas brought by Corey’s vocal delivery. The whole EP is worth checking out, especially for fans of the songs, as it’s all excellent to be honest.

For Fans Of: The Original, Godsmack, Drowning Pool

This track comes from Boston rockers Crash Midnight, and brings an exciting new energy to modern rock! Heavily influenced by some bands close to my own heart; Crash Midnight re-invigorate the genre with their vintage guitar riffs, pounding drums, and searing vocals demonstrated clearly in this track. The main riff is catchy, bluesy and excellently embellished with harmonised guitar lines; This riff also features as a central part of the chorus, providing a feeling of familiarity to accompany the catchy vocal melody. The drums really drive the track forward, pushing the energy to new levels (The presence of the cowbell is particularly pleasing). Vocally, the range is somewhat lacking when compared to others in the genre, but its powerful and passionate delivery helps it combine well with the band and polish the song nicely. My favourite thing about this track, is the pure energy delivered, great to see new music like this!