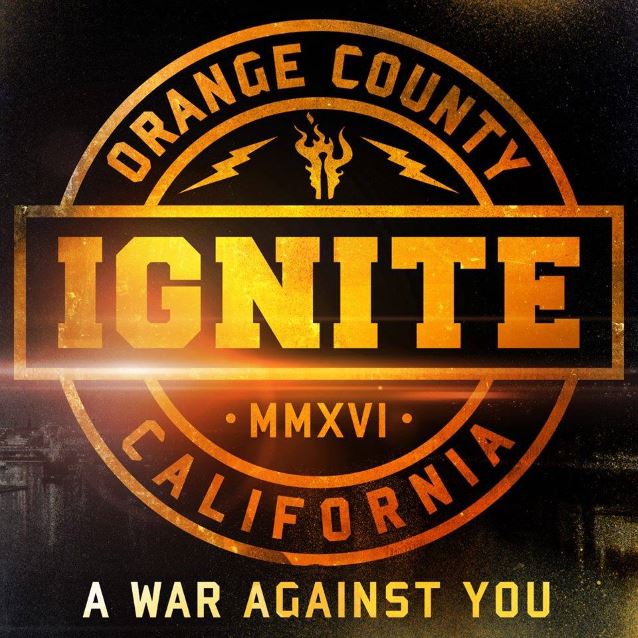 A War Against You is the band’s first studio album in 10 years, and shows they’ve not lost anything in terms of ability or energy! After the success stemming from their 2006 Our Darkest Days, the members decided to go their separate ways for several years before returning to re-Ignite (oh yes, I went there) their passion.

Having not listened to Ignite before, I was excited to discover if they still had that something special about them to ensure their relevance in today’s market. To my pleasant surprise, I was left astounded by their brilliant combination of aggressive, energetic, fast paced riffs with the subtleties of diatonic, memorable melodies. Begin Again instantly shows you what the band capable of melodically and harmonically, with an a cappella intro that could rival Queen! This is before dropping into a crushingly heavy riff that moves into a groovy verse.

The riffs on this album, are admittedly nothing special. They’re not bad; they’re very energetic, and suit the songs and sound good at the time of listening; but I would struggle to pick out any that I distinctly remember as outstanding and could sing back 3 songs later. However, that is somewhat typical of this melodic punk rock genre. The riffs lay good foundations for the songs and work well together, providing the core sound of the band. This then allows the vocals a freedom to be more creative and give space for attention to the lyrics.

The lyrics are very well-conceived, thought-out and delivered with great passion. Nothing Can Stop Me is dedicated to a friend of the band who is fighting a brain tumour. The lyrics discuss feeling trapped, alone and the desire to give up amidst adversity, yet provides their friend the band’s support, suggesting that it can be over-come with a great support system. This song particularly demonstrate’s Teglas‘ lyrical prowess and poignancy.

The album is full of positives: the tunes and melodies are catchy; the lyrics are understandable, clever and enjoyable; there is an incredible amount of energy and passion in the songs. However, the album is just missing  a certain wow factor. The songs are incredibly enjoyable; but they push very few boundaries. The most distinctive section is at the very start of the album with that a cappella section in Begin Again. Also, the tracks Rise Up and Work contain interesting and refreshing changes in texture and pace but these are two out of thirteen songs. Largely, the album is very similar with few outstanding or lastingly memorable moments; and this could be a non-issue, but it is in a genre that has been thoroughly explored over the last 15 years. As mentioned, it’s still very enjoyable, and it’s a solid return for the band, just not outstanding.

Tags: A war against you, album preview, ignite, new music