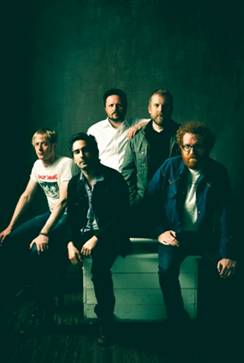 Mystery And Wonder is the interesting new track from US cult americana-rock heroes Blitzen Trapper. In the band’s 15 year history, they have developed a strong reputation in the U.S. and recently announced that they will be starting on the European arm of their tour in February, to support their 2015 album .

The song itself is pleasantly chilled out; the steady drum beat provides a good foil for the effects laden guitar sound to create an atmospheric sound behind the floating vocal line. To earmark transition sections, complex, bluesy guitar lines are incorporated that add interest and drive the song forward. The vocals provide some further grit to the song, while providing a memorable hook in the chorus; summing up the meaning behind the song which is illustrated in the video: reminiscing about lost love and how they can go on as separate entities. Ultimately the over-repetition of ‘Mystery and Wonder, if we only had each other’ combined with its prominence in the mix means the catchy melody quickly grows tired.
The most interesting section happens following the guitar solo; as the guitars fully distort, and the drums take control of the track emphasising chord changes and pushes as a band.

Overall the song pleasant to listen to, if you’re a fan of the band or the genre, then it should be a good addition. Although I doubt the track will redefine the genre.

Mystery And Wonder is the title track from the band’s new EP, which also features a version of traditional american folk song A Man Of Sorrow, recorded specially for the TV show Fargo, it’s well worth a listen. You can buy the EP from iTunes.

The band’s European tour dates are listed below; and you can purchase tickets for the shows here: