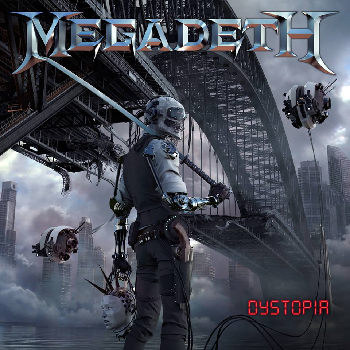 With the album’s release only days away, Megadeth‘s PR is in full swing, and iconic frontman spoke to LA Weekly about the upcoming New Album as well a variety of other interesting things.

The new album marks the studio debut of Mustaine‘s latest guitar partner-in-crime Kiko Loureiro. Kiko has previously been described as having “Astronomical ability” by Mustaine,  and he took this oppourtunity to discuss Kiko‘s interview process: “There really wasn’t so much a tryout per se as me just wanting to put my eyeballs on the guy. Because I’ve been doing this long enough where I can watch somebody play on video and listen to them on tape and know if they’ve got the goods. And then at that point, if they’re talented, you just have to see whether or not they’re the kind of person you’re going to be able to get really close to and spend every waking moment of the day for months and months out of your life together. Because there’s so much time that you spend on tour and on tour buses and stuff. And if you have somebody that’s a great player but he’s an asshole, it’s a recipe for disaster.”

Despite the new man’s easy

integration, there were rumors of other guitarists joining the band: “We did [talk about Slash joining the band]. Actually that was discussed more between David Ellefson and Slash than myself. Dave was the one [who] tells the story about that. I was there but I wasn’t the one who initiated the conversation. Those guys were way, way closer than Slash and I were at the time — we’re all super-close but Dave and Slash were really, really tight.”

Of course not everything comes naturally to the frontman. Everyone is aware of Mustaine’s incredible ability to play virtuosic rhythm guitar parts while somehow singing over the top of it, yet he states “There’s stuff that I’ve written, that I can obviously play in the studio, but singing and playing at the same time is really hard, like riding a bicycle and sitting on the handlebars.” he goes on to state his admiration of other guitarists playing styles “There are parts that there’s some finesse to, because I have more of a snot-nosed kid approach to playing guitar, the other guitar players that I’ve played with, it sounds better with their fluidity to have them play it.”

You can read the rest of the interview at LA Weekly, where loads more topics were covered.

Scars From Rain Unleash Debut Video, Light Within My Misery