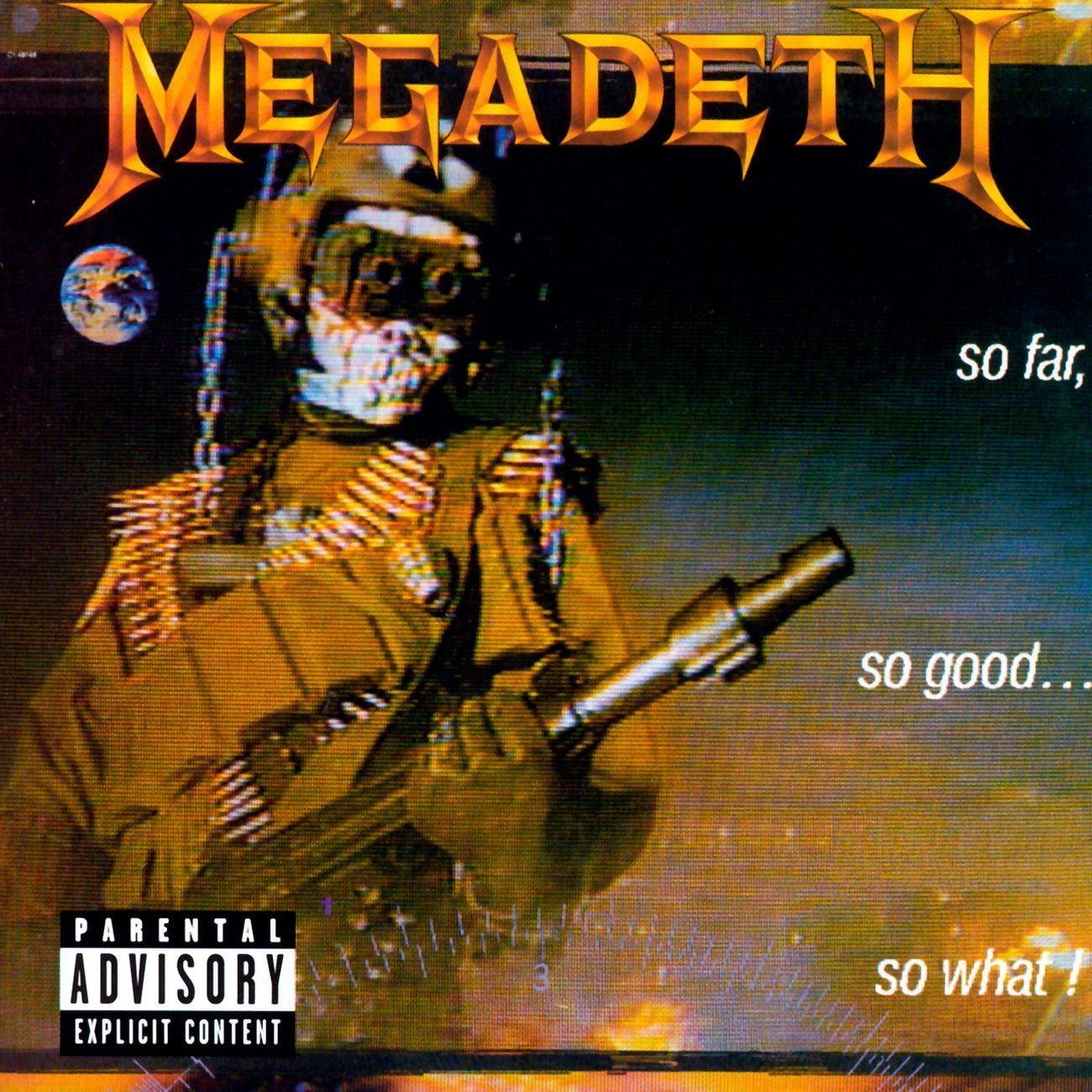 Impressively, amidst hype surrounding the new album, it is the 28 year anniversary of Megadeth‘s third album, So Far, So Good…So What! As a follow up to one of the band’s most iconic albums, Peace Sell…But Who’s Buying, this was always going to have difficulty living up to the hype, leading to the album receiving positive but unspectacular reviews. The loss of two key band members in Gar Samuelson and Chris Poland certainly didn’t help as they were hurriedly replaced with inferior band mates; Chuck Behler and Chris Young. Mustaine clearly thought as much, replacing both shortly after completion of the album’s supporting tour. These next changes brought in, what is considered, the strongest version of Megadeth‘s line-up, with Marty Friedman and Nick Menza joining the band in 1990. The importance of the album to modern metal is now evident, as without this release going the way it did, the Megadeth that made Rust In Peace would never have formed. Thus leads to the question So far, So Good….So What Now? As we examine the album nearly 30 years on from its initial release.

Despite its availability, I had never given this album a proper listen, perhaps because when introduced to Megadeth, everyone raves about so many other albums, that this one gets somewhat lost in their extensive back-catalogue. Being situated between Peace Sells, and Rust In Peace is like sitting at the bottom of a vast chasm surrounded by two behemoth mountains, and it is easy to get overlooked. Upon an in depth look into the album, I can draw many positives from it; although the downsides also become more apparent.

Mustaine says he always tries to produce something new with each record he puts out. Unfortunately, I’m not sure this quite fits that criteria. Hook In The Mouth perhaps has an element of a new direction in the opening section, yet it quickly reverts to to an all too familiar sound: A sound that was not even unique to Megadeth at the time; as it features many typically fast paced, aggressive riffs. Further, tracks that do attempt to include something new, like Into The Lungs Of Hell, are poorly executed. The track features an array of instruments never heard on another Megadeth song, before or after, and show the intent behind trying something new. However, this is definitely a step in the wrong direction. The synthesized brass sounds horribly out of place and marr the outcome of the whole track. Of course the sound of the tracks is marred by the poor mix and production.

To mix the album, the label hired Paul Lani, who previously had remixed Peace Sells…But Who’s Buying? Mustaine was initially skeptical of his appointment and eventually fired the producer during the mixing stage of production due to personal differences. Mustaine would go on to regret this decision, describing Lani‘s replacement, Michael Wagener, as “pedestrian” citing the album’s “muddy feel” in particular. This sound is very apparent when listening back to the album, and even the remastered version fails to rectify these issues. However, the remaster does include Paul Lani mixes of various tracks; these are excellent and provide a much better picture of how the album should sound. There is improved clarity in all parts, definition in the low-mids and a crisp top end. The track that gains the most from this remix is the aforementioned Into The Lungs Of Hell which, despite still containing various synth sounds, now has a magnificent presence to it: The guitars are clear and audible, meaning that the solos are distinctive and provide the clear melody in the track. These are much more appreciable as they are distinguishable from the rhythm guitars, which were indistinct from the kick drum previously.

With this in mind, it perhaps unsurprising that my favourite tracks from the album are those for which a “Paul Lani mix” version is available on the album. However, listening intently, attempting to ignore the horrendous mixing flaws heeded similar conclusions. It is largely due to the song structure, riff quality and lyrical content. For example, Set The World Afire is classic thrash metal at its finest! The intro moves through 3 or 4 songs worth of riffs; aligning with the Thrash genre, it is reminiscent of Metallica‘s Seek And Destroy structurally, and in terms of how the riffs are used, developed and varied. This is prevalent in 502 and Liar as well. Unfortunately this is where the problems lie: While the songs are excellent thrash songs, they fail to push the boundaries of the genre in the same way that surrounding Megadeth albums did.

The inclusion of Anarchy In The UK is strange for this album, and hints that the band was attempting to showcase more punk influences throughout the album. It’s true that Punk and Thrash share some features; maybe these were simply not distinct enough, and so the punk spin on thrash fails to come across. As a result Anarchy sounds out of place, and a cheesy cover, rather than an excellent, unique one. This track is also the only disappointing one in terms of lyrics; as hey were slightly mistaken because Mustaine claimed he had heard them incorrectly. This is just negligence, and opened the album to further criticism, unnecessarily.

Thankfully, for the remainder of the album, the lyrics do not suffer, and keep Mustaine‘s reputation for writing about subject matters that are in touch with reality alive; including social issues and taboo topics. The topics covered include coping with the death of a friend (In My Darkest Hour), nuclear holocaust (Set The World Afire), driving fast cars (502), and revisionism and censorship (Hook In Mouth). These are undeniably strong, relatable or controversial topics, perhaps exempting 502. The lyrical highlight of the album comes on In My Darkest Hour. Inspired by the death of Cliff Burton and written in one night; the lyrics are powerful, emotional and relatable. A real high point on the album; one that has helped many Megadeth fans deal with death since its release.

Overall, it is difficult to provide an accurate assessment of the album, looking back. Thinking about it now, the music is definitely not pushing any boundaries, and to my knowledge this would also have been true at the time. Perhaps the aim was to put a Punk spin on the Thrash genre, but this fails to come across in any songs aside from the cover. Finally, the combination of unoriginal songs, with poor production is ultimately a damning one. Writing tracks in a familiar genre means that they have to be exceptional examples of the genre; and despite Mustaine‘s song and lyrical writing, as well as the band’s performance; the poor mix prevents the songs from being truly enjoyable, and may have prompted fans to just listen to other bands/albums if they wanted their fix of Thrash metal. I think ultimately this is why the album is often overlooked by new fans, and did not receive extensive praise upon release.

Tags: Dystopia, january 19, megadeth, metal, music review, mustaine, review, rock, So far so good so what, this day in metal

On This Day In Music- Jan 12th Led Zeppelin