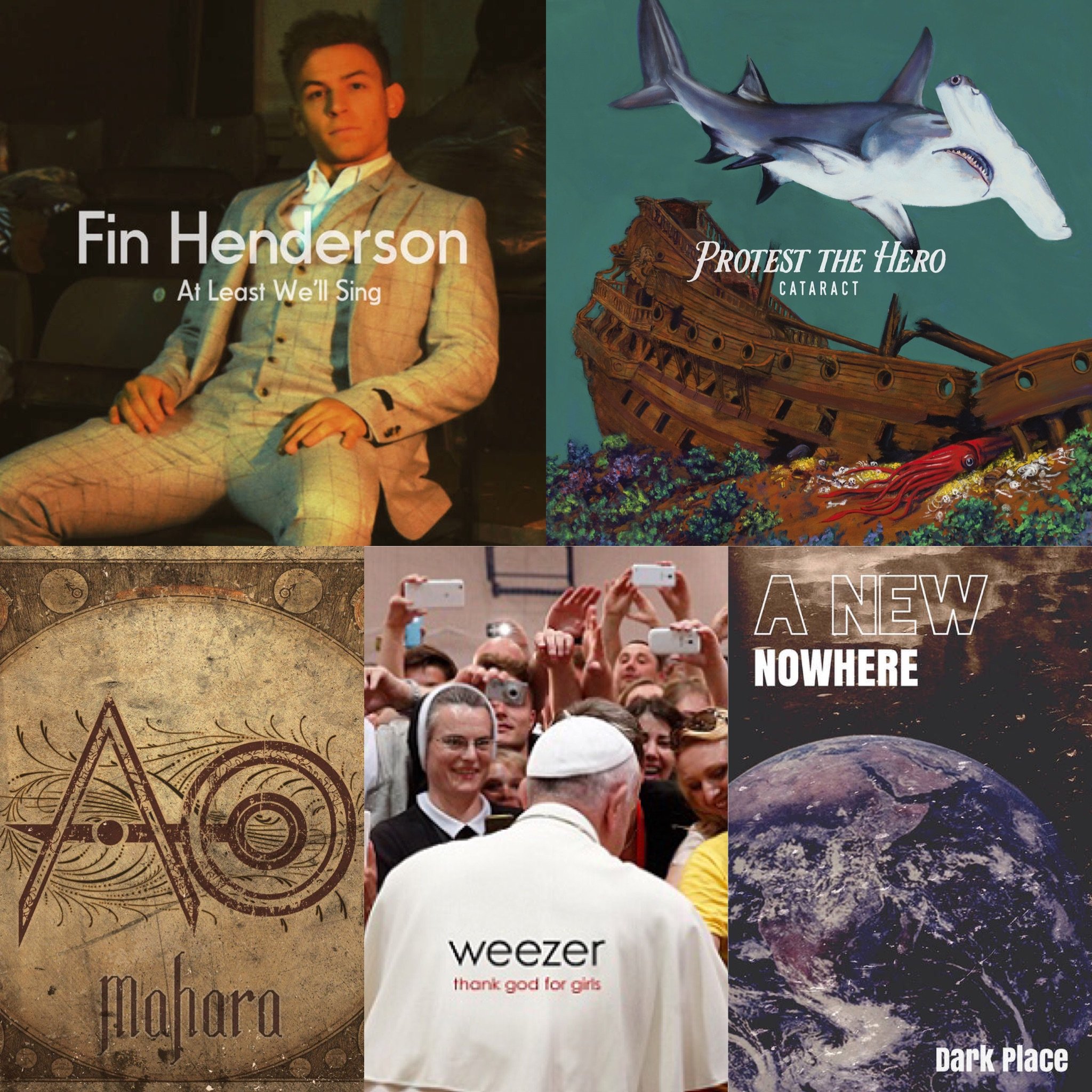 Hello and welcome to the latest installment of my Songs Of The Week! If you’re unfamiliar with this section, it’s where I let you guys in on what I’ve been listening to each week. Despite it being Megadeth week, I have somehow managed to listen to some not Megadeth songs! These are possible the only ones though; thankfully they’re amazing. We’ve got a couple of unsigned bands, and some new tracks from well established bands, and an early contender for my song of the year!

What is there to say about this song! It really grabs you right from the start with an impressive a cappella intro provide a great insight into Henderson‘s incredible musical talent. This then builds into the verse without losing the a cappella parts; a challenging feat that is pulled off fantastically, giving really great harmonic depth the track.  As it’s built around a variety of voices, each with their own line, they interact interacting in perfect polyphony, so the result in a lot of different melodies going  in different directions, like in classical music, so there’s a lot more happening musically compare to in a guitar based backing when at most it can maybe play two lines through use of chords. When Finn‘s lead vocal enters you’re hit by a distinctive and outstanding voice; it provides a memorable lead melody, along with insightful and meaningful lyrics. I really love how intricate the backing vocals in the chorus are as well; it’s just an all round great track!

For Fans Of: Plan B (The second album)/ Will Young?/ tbh I’m kind of struggling here, if you have any suggestions, let me know in the comments

This is now the 3rd single Weezer have released in the last 4 months. Despite claims that there would be no new album; I think on some level we all knew they were lying; and the release of this track came with the announcement that their new ‘White Album’ would be released on April 1st (Knowing them it’ll be some sort of elaborate joke though…).
To the track itself: I really enjoy it, the catchy melodies and previous love of Weezer definitely have an impact though. I really like the idea behind the lyrics; that girls impact the life of guys in so many different ways. Then the verse lyrics highlight the various ways in which they do this; some good, some bad, some just straight up strange. Anyway, the lyrics end up being really, just weird. I implore you to have a read of them via the link above; they are verified by Rivers himself, and just so…typical Weezer (I can’t really think of another way to describe them to be honest). Rivers admits the title “Seemed like a big, mainstream-ish title but I knew I would be able to pull all kinds of weirdness out of it.” so well done to him for getting so much weirdness out of it. Beyond the lyrics, the song is pretty decent; the music doesn’t really provide anything new; but I think it’s the lyrics and their delivery is what makes it so engaging. I’m looking forward to what the rest of the album with hold.

Ao – Dress Up For Your Burial

Released in September 2015, this track has been available for a little while; and is from Ao‘s debut album. The track is pretty all-out thrash; right from the start you’re hit with a speedy, intricate riff; underpinned by an equally fast blast beat on the drums. I think the track would benefit from a bit more melody generally throughout, but it sort of is what it is. The chorus certainly has a memorable aspect to it; the drop to half time allows the vocals to become clear and have a bit more melody to them; although I couldn’t tell you what he says. The second half of the song is a bit better as it sticks to a less rigid thrashtastic formula; and features some interesting drum patterns underneath impressive guitar work. Overall I like the track because I’m in a bit of a thrashy mood this week, and the second half provides a nice change from the verses; the structure is also pretty interesting; it doesn’t seem to follow a rigid structure of any kind. This is again quite a prevalent feature of thrash metal; but it  is what it is, a thrash song, at least it’s quite an interesting one.

For Fans Of: Megadeth/ Gojira/ Lamb Of God

A New Nowhere are an exciting new Alternative Rock trio from Newcastle upon Tyne. Currently working on their debut EP, Dark Place is the first glimpse we have into seeing what the band are capable of. The song is kicks off with a really heavy riff, it’s very engaging and a great attention grabbing start; although the first ten seconds have an EQ filter on it; I understand the idea behind this feature; but in truth it is poorly executed, detracting from the impact of the intro rather than enhancing it. Impressively, that is my only criticism of the track!
To move into the verse, the song drops down to a much cleaner and more alt. rock sound for the vocals to enter. This change is handled very well, and is a great example of the good production present on the track. One of the main reasons I like this track is how well they combine the heavy and soft aspects of the track. Only having vocals over the softer sections allows them to stand out more, and be more easily relatable. The voice here is reminiscent of a Pearl Jam/Puddle Of Mudd sort of sound; although this could could be impacted by the track underneath.
The chorus is an excellent change from the verse; it’s definitely not as heavy as the intro, but it is a distinctive change. This section is expertly crafted, creating a platform for the vocals to deliver an incredibly memorable melody, helped by the melody in the guitar lines. The heavy intro riff returns in the middle of the track, and again at the end; it is a welcome change of texture at these points, and when it’s used as the outro, the alternate groove on the drums manages to make the riff sound even heavier than before. Overall, it’s a really great track, well worth a listen, and I’m looking forward to hearing the finished EP later this year.

For Fans Of: Pearl Jam/ Creed/ Puddle Of Mudd

With Protest‘s subscription based new album consistently delivery new tracks on a monthly basis, it is really difficult for me to not include each new track as it’s released. This week I just couldn’t help myself! This is definitely one of my favourites from the new album series; like most PTH tracks it kicks off with a really fast, hard hitting virtuosic riff. This riff can grow a little tired after a while, but thankfully the verse takes over; and I just love how it works with the vocals in this section. The the changing time signatures for the breaks between vocal lines just shows the virtuosity and technical ability of the whole band. I’m particularly looking forward to watching Mike Ieradi‘s drum along to watch in amazement as he effortlessly keeps track of everything going on throughout the sections.
The main thing I really enjoy about this song, is how it progresses; it follows the consciousness of someone dealing with cataract and how they notice things getting worse over time. The highlight of this is probably half-way through the song while the guitar is playing another high pitched virtuosic line; the vocals underneath depict a person in pain; struggling to come to terms with the loss of vision. Further, my favourite section, featuring a high register guitar line, descending sequentially; with, initially, the lyrics “This Ragged Tooth to rip through fish“, the vocals are in full voice; clean and unhindered, as the lyrics depict only the initial signs of infection while the subject is majoritively healthy. Yet when this section returns towards the end of the track with the lyrics “This is the nightmare from which you are never awake”; the delivery is a lot more aggressive, depicting the subject’s anger over their loss of sight; before altering to a much softer delivery to display the new found feebleness; contrasting the initially strong person with a “Ragged tooth to rip through fish”. The modulation into the return of this section is also incredibly brilliant. Basically, I really like this song, so much of it is so well thought out, and the execution of this is brilliant in every aspect. Dare I say an early contender for song of the year?

Unfortunately it impossible to find a Youtube video/spotify/ bandcamp link due to the band wanting to preserve the importance of the subscriptions of those paying. Though after hearing this song and being subscribed from the beginning, it is well worth the money https://protestthehero.bandcamp.com/

Hope you enjoyed this week’s installment, as always these tracks will be added the Spotify playlist.