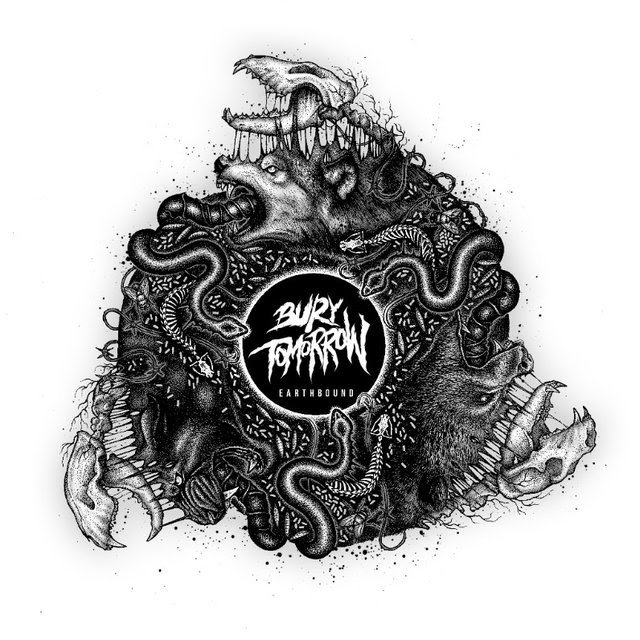 Bury Tomorrow is one of those bands that I’ve always seen as having potential, but never really fulfilling it. After hearing the excellent Lionheart back in 2011, I was disappointed to discover their other tracks were not up to a similar quality. Therefore upon hearing the excellence of Earthbound, I was cautious to not get over-excited, but Last Light was even better! They couldn’t possibly produce two tracks of such outstanding quality amongst an album of inferiority, could they? I was eager to find out if this would be the time when Bury Tomorrow fully realise their undoubted potential.

Bury Tomorrow have made great use of having two remarkably different vocal styles. It’s by no means a technique unique to them: Atreyu and Killswitch were some of the earliest bands I heard using it. However, unlike some other bands, Jason Crown‘s clean vocals still have an excellent tone, and slight grit to them, meaning they would be perfectly suited to this music even without being offset by the powerful growls of Daniel Winter-Bates. Last Light is a fantastic example of how well the two vocal styles interact, perfectly offset each other, and are used to suit the needs of the song. The track portrays a conversation between two lovers separated by the death of one of them; each vocalist portrays a character, and the harshness of the vocals is varied to depict the emotions being portrayed. The outro section repeats the lines “when the light of day fades, my soul will drift away, and I promise you I’ll meet you at the gates” several times as the character falls into acceptance of the situation. This is mirrored by the growls becoming less aggressive. It’s a really powerful effect that shows up in various places on the album, and shows a maturity and progression in the band’s songwriting.

It’s clear that Bury Tomorrow gave special attention to the overall construction of their songs and the album, with Winter-Bates discussing the album’s demi-concept prior to release. This is apparent when listening to the lyrics and vocals in the tracks. There are also elements of this in some musical aspects, Cemetery for example has a distinct eeriness the chorus, produced by the lead guitar part and its effects, meaning that the lyrical concept for the track matches up perfectly with the music in the song. However, too many tracks overlook this aspect and follow similar structures and formulas, resulting in the album becoming stale and overly familiar very quickly. The first indication of this is that all tracks are of similar lengths; between 3:19 and 4:06, and it becomes further evident upon realisation that all verse vocals are performed by Winter-Bates, and choruses by Cameron. Each track has a breakdown featuring a heavy drop, more unclean vocals, and, admittedly, an interesting guitar line. These are by no means bad features, and are part of what makes the songs on the album engaging and exciting on an individual level. However, after hearing very similar songs one after another for 40 minutes, it somewhat blurs in together, with the occasional moments of standout brilliance that catch your ear.

Fortunately, Earthbound does have many flashes of brilliance to keep the songs engaging, coming in various forms: dramatic changes in textures or grooves as in The Burden; catchy and memorable vocal melodies in Memories; or incredible, almost djent guitar riffs in Bloodline. What really make the difference in a lot of the songs, is the outstanding drumming. These often are the main reason a certain guitar riff drifts by unnoticed, or a vocal melody becoming really stuck in your head. For example, the final chorus of For Us begins how it has appeared throughout the rest of the song; in that half time feel, sounding pretty heavy, and it’s engaging thanks to the dramatic change in feel following the uptempo verse. However, while in this half time groove, the guitar melody goes somewhat unnoticed, and the vocals sound a little short of energy. This all changes when the drums step up a gear, and really go for it in the second half of the chorus: suddenly there’s an incredibly energy to the section; the vocal line really grabs your attention; and that guitar melody displays itself as an excellent counter melody to the vocals. It’s little changes like that which help the tracks to stand out from one another despite the familiar structures.

Overall the album is a difficult one to gauge. The songs are excellently assembled, and are great individual songs; they each have flashes of brilliance in their own ways, and display an immense amount of thought in their conception. However, as an album as a whole, it lacks variety; the structures are unoriginal and uninspiring; the first guitar solo comes towards the end of the final track on the album; and the guest vocals of Jamey Jasta (Hatebreed) are not up to the same standard of the Cameron or Winter-Bates; lyrically or melodically. All that said, I love listening to the songs on their own, and I’m pleased that Bury Tomorrow have managed created some incredibly impressive, engaging and brilliant songs. They are close to fully realising their potential with this record; only really missing some variety to round it off.