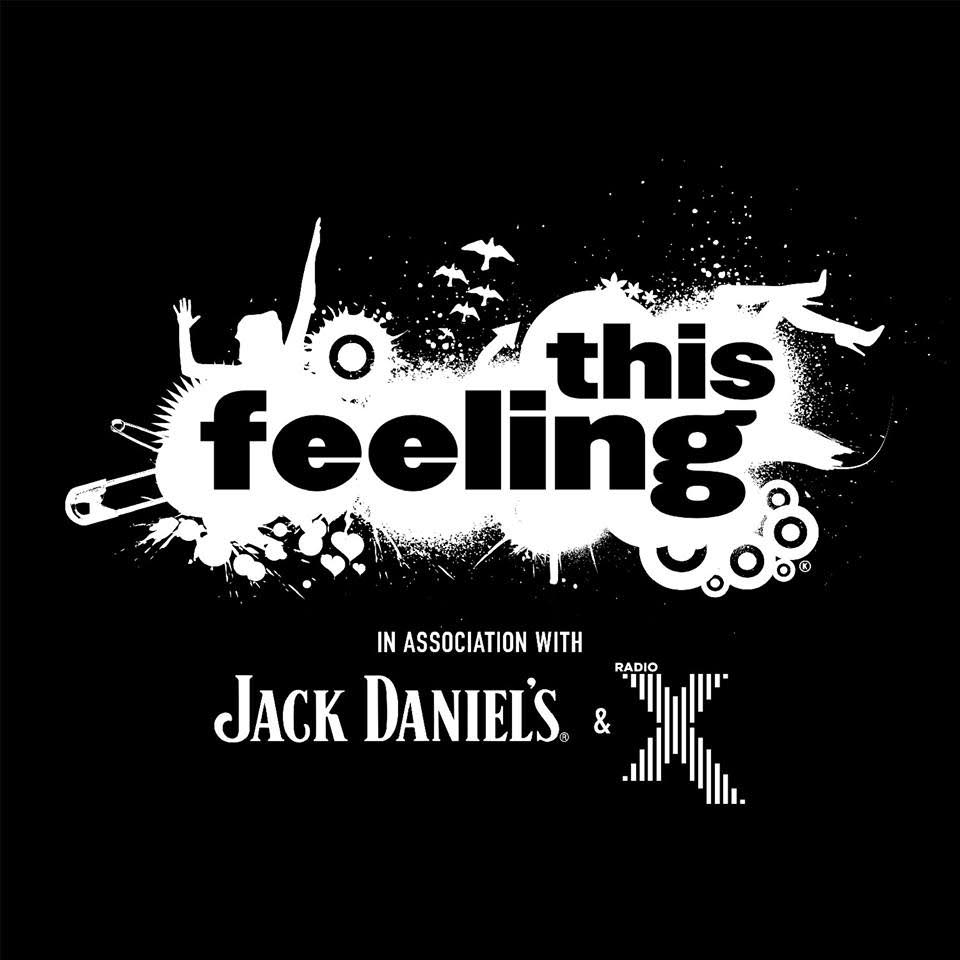 Night & Day Cafe were playing perfect hosts to kick off This Feeling‘s Big In 2016 UK tour. Billed as the UK’s most rock’n’roll night out, and the best place to see the next big things in advance; it promised much and I’ve been eagerly anticipating this gig since first hearing about it several weeks earlier. On the line-up was an array of exciting unsigned bands; and a couple of newly signed bands; all coming from the North West… and Cardiff; but who would standout and shine?

This was the first gig I’d been to in about a month; and my first time in Night & Day Cafe in over a year! I’m happy to say that it’s kept its Manchester charm; managing to feel like a warm welcoming home, while providing the perfect atmosphere for local bands to show off their skills. The lagers were cool and refreshing, with numerous options; all costing standard Northern Quarter prices. The audience were clearly undeterred by the cold January night, showing up in their hundreds, and there was a certain buzz of anticipation. The place was clean and spacious, while the famous gig posters plastered on the pillars made the history of the place incredibly aparent. The stage was big and spacious, and I was excited to watch how the bands would make use of the excellent facilities. Of course, all band’s had their own set-up, all on stage at the same time, diminishing the space for the opening bands, but opening it up for the headline acts.

Clearly enticed by the promise of a free Jack and Coke to the first 50 through the door, it was good to see a decent sized audience in for the first band. As everyone was still settling in, Bang Bang Romeo took to the stage. It’s always a difficult task going on first, the audience isn’t drunk yet, and often feel uncomfortable standing in the middle of a room; not unlike an awkward school disco. Anastasia Walker, did an excellent job of fronting the band and making their presence known to the room, with her incredibly powerful and emotionally charged vocal performance. She was a commanding presence on the stage, making good use of the room available, having fun with it; and passionately conveying her carefully crafted lyrics to the audience. It was hard to tear yourself away from her, but the whole band had a great energy and it was a fantastic opening set.

The songs were remarkably well written, making great use of textural variation to provide power and and underpin the times when Walker really let her out the full power of her vocals. The set was well constructed, beginning nice and strong with Revolver, providing a nice settling change of pace with tracks like Chemical mid-set, before embarking on the emotional journey that was Strangers. It was really excellent, the best band I’d seen live in quite a while, and if they were opening, I was excited to see what else This Feeling has in store!

It didn’t take long for Cardiff based Indie Rockers Tibet to take to the stage. The band were certainly a change of pace, following Bang Bang Romeo, and as the room really began to fill up the band started off tentatively. The music was full of energy, and had punk elements to it, with an extra harmonic layer by way of the second guitarist. The band, however, seemed nervous to kick off despite the energetic music. Tibet let their music do the talking initially, but soon grew into the occassion. There were guitar riffs aplenty throughout and excellent vocal harmonies proving the musical talents of the guys. See You Out Tonight, off the band’s new EP (available for free!) saw the band really hit their stride as they began interacting with each other and the crowd a lot more; led by the enthusiasm of the bassist on stage right. The catchy melodies and easy to replicate vocals spurred on the crowd’s engagement. The set only improved from there as Prom Queen God showed a heavier side to the band; and One By One was a much funkier number, featuring a good use of falsetto on the lead vocals. The band rounded off their set on what is clearly a favourite of theirs; She Don’t Know. It saw the guys really let go, have immense fun on stage, and ended with an appropriately clichéd classic rock ending. Very fun band to watch, and great way to pump up the crowd for the rest of the night.

No Hot Ashes took to the stage next, and wasted no time in introducing their unique sound the room. After recently announcing their deal with Playing With Sound and having enjoyed several tracks prior to the gig, I was excited to see what the band had to offer. I didn’t have to wait long to hear that trademark funky groove; as the band kicked things off with a great version of Grandmaster Flash‘s The Message; immediately engaging the crowd, and getting them dancing. With frontman Isaac Taylor demonstrating his excellent, albeit slightly unorthadox dance moves, clearly pandering to the excited audience, it was great to watch, and hard to take your eyes off him as you daren’t miss what he might do next! What followed was an array of original tracks from the past year or so. Beginning with a personal favourite, Smooth, and continuing to provide reason to the claim they’re one of the best unsigned bands from 2015; and a hot prospect for the year. A sneak peak was added to the end of the set with an as yet unnamed track set to be recorded in mid-March. The set never really reached the heights of the opening track for crowd participation, but they merrily danced along to the funky tunes on offer, vibing off the band’s insatiable onstage energy.

What followed was easily the heaviest band of the night in Hello Operator. Displaying their unique brand of raw, bluesy, high octane rock; frontman Max Dalton was the epitome of cool, offering a commanding presence and creating a great connection with the crowd before him, allowing the band behind to really let go and roam the stage, which was now a lot more spacious. The music was full of energy; featuring driving drum beats; technical guitar riffs; and easily the best guitar work of the night, with roaring bluesy solos, and a great tone. Their set was well constructed, balancing the all out driven tracks like Stephanie with some lighter and slower tracks, showing their range. The whole band looked experienced and at ease with the situation, despite the room now being at near max capacity.

Cupids were next on, and judging by how the room flooded to the front, it’s clear this was the band most people came to see. By this point it was well past 11, an unusual feature for live gigs, but I sure wasn’t complaining. Admittedly, Cupids were a bit of a surprise package, after taking quite a break following the previous band to set up the keyboards, the band seemed dressed to take the music up a notch from Hello Operater. Stood afront the stage was guitarist looking like Mustaine, dressed like Joe Perry in a velvet jacket, and behind was the keys player/lead vocalist in a heavy biker jacket. I was almost expecting some sort of Aerosmith/ Motorhead combination. What came out was anything but; quite groovy, bluesy rock with less of a heavy influence; more akin to The Rolling Stones. It was very enjoyable, the crowd absolutely loved it; they had clearly brought a following of their own and this was definitely the peak of the night atmospherically, and audience-wise. Despite the initial feeling given off, Cupids went on to deliver a couple of more chilled out, laid back tracks. They didn’t particularly fit with the excitement of the crowd, but they showed a great array of songwriting ability, as all tracks performed were very well written. A clearly talented band, but towards the end of their set, it seemed like much of the crowd was ready for the club night to begin.

Fronteers were on next to round off the fantastic evening of live music, and took to the stage exuding a very professional vibe. Everything on stage seemed meticulously placed, the backup amps had been removed allowing plenty of space to utilise; all 3 microphones were in a perfect line; and the band wore matching plain black long sleeve tops. By the end of their set however, I think the band were regretting their decision as it looked incredibly hot on stage! There was once again good guitar work from the indie quartet; and a great energy to the band; providing a similar sound to a harder edged The Kooks. Unfortunately, frontman Andy Towse seemed uninterested in engaging with the crowd at all, barely speaking to them between songs or making them feel part of the performance; it was quite disappointing to be honest and not what I expected from the headline act. The songs played were really interesting, with good variety, and the penultimate track was exceptionally well constructed, with a slower build before emerging into life. The closing track of the night was a livelier, almost poppy number that the crowd really seemed to enjoy; happily dancing along. Although by this stage much of the audience was there for the club night to sing along to well known indie/brit pop classics.

Overall, the night was incredibly enjoyable! There were some tremendous bands playing, demonstrating some incredible talent. All of various styles and genres, each with providing their own unique twist to their chosen genre. Any of the first 4 bands could be labelled as my favourites for the night, creating a fantastic evening of music. The venue was excellent, creating a great, warm, exciting atmosphere for the bands the perform. The only thing that I think let the night down, was having some bands on so late: lots of people have a ‘last train’ to catch at 11pm, which saw some of the crowd leave, and their replacements were mostly interested in the club night. This somewhat lessened the impact of the closing bands, as the crowd were less into it, but I struggle to fault the bands who played, and made the most of the opportunity given. One thing’s for sure; all these bands certainly have a lot to offer, and I for one will be eagerly awaiting future releases.

Have Protest The Hero Found The Future Of Music Distribution?

Interview With No Hot Ashes