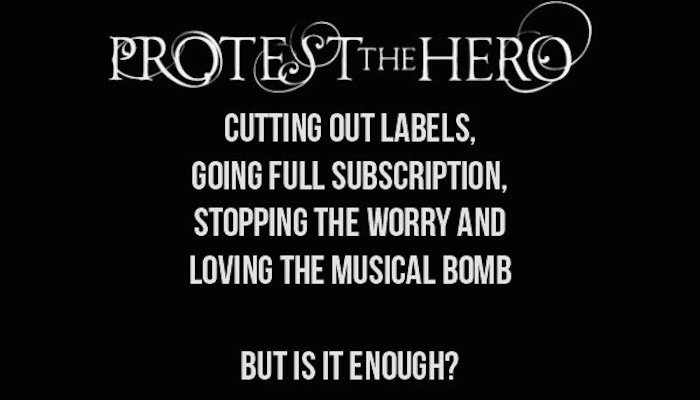 It’s now old news that for the release of their latest EP, Pacific Myth, the guys at Protest The Hero (PTH) tried a slightly different method of delivering their album to the masses. For those who haven’t heard, in October 2015, the Canadian Prog Metal quintet announced that rather than distributing their album via iTunes, in store or on Spotify, it would be delivered through a subscription style package on Bandcamp. This announcement was met a lot of surprise and intrigue in the music industry, as are many innovative ideas that could potentially change the way the masses consume their music. There were several concerns put forward about how successful this distribution method would be, and if it could actually make money. If it did make money, could this be the future of the music industry? So following the release of the final track from the EP, Caravan, on Wednesday, I thought that, as a subscriber to the service, it would be worth reviewing my experience, and assessing if this method is potentially the future of music distribution?

You might be wondering what the service actually included, well, there were two potential packages, Tier 1 for $12, or Tier 2 for $25. Tier 1 included the 6 tracks on the EP, released 1 per month for 6 months, as and when they are written and finished. As well as this, subscribers received many features you would usually expect to receive with a special edition version of an album; including video playthroughs; exclusive guitar, bass and drum tabs; instrumental versions of the tracks; exclusive artwork and lyrics; and the ability to purchase exclusive merchandise. For Tier 2, subscribers would receive everything from tier 1, as well as 120 minutes worth of behind the scenes, making-of documentary style footage filmed by the band. As I only purchased the tier 1 subscription, I can only really comment on that aspect; but I was pretty happy with what I received over 6 months for $12 (£8.30). A review of the EP itself is available here, but for now we’ll look at if the distribution method was successful for PTH, and if it’s likely that other bands will follow suit.

The first thing to consider is, how would the service make money. On the face of it, charging $12 for 6 songs seems extortionate. When you factor in that the songs hadn’t been written yet, and the band are essentially asking people to have faith that they’ll deliver $12 worth of music in 6 songs, it seems even more ridiculous. Yet Protest The Hero clearly have made money from it, otherwise they probably wouldn’t have been able to make the album at all; so how have they done it, and why this method?

Well, to make the subscription service have any value at all; the EP and extra features needed to be exclusively available via subscribing; otherwise why would people not listen to it via their usual means; on Spotify, Youtube, or the radio? The first track, Ragged Tooth, was released publicly to raise awareness, ensure people knew about the release etc. Other than this track, there were only 20 second previews on Youtube, nothing on Spotify or iTunes, and little or no radio play (in the UK at least). However, this presents problems straight away. With the general consensus being that people will only listen to music if it’s easy to find, get or listen to; the decision to release an EP via one, discrete stream immediately reduces the exposure of a record, and the ability to attract new fans. This means that all revenue for the EP would likely come from current fans, willing to pay a premium for the 6 songs that haven’t been written yet, with the promise of band specific goodies. Immediately we’re seeing that this probably isn’t the best strategy for new bands who need mass exposure to new audiences. However, for Protest The Hero, it actually seems like quite an attractive proposition.

Protest The Hero have always had a dedicated and supportive following; there are few people who casually like the band, only those that love, or are uninterested. The band have managed to create a very insular, community style camaraderie amongst their fanbase in this sense; and fans feel very connected to the band, almost like partners. In fact, their 2013 album, Volition, was funded by fans via indiegogo, a project which raised 271% of the initial asking amount. This would definitely have reduced the risk or doubts of “What if nobody buys it?” that may circle the heads of other bands attempting this distribution method. Ultimately that’s probably why PTH adopted this strategy where other bands may not. The fact that fans are willing to blindly support the band without actually knowing if the end product is going to be good, is something that very few recording artists can actually boast.

Interestingly, the inclusion of a subscriber-only forum will have made fans that have previously only liked the music, feel much more like part of band’s family. Using myself as an example; I have previously found Protest The Hero to be fairly hit or miss; loving one or two of their previous songs, but not enjoying a majority of what I’d heard. The main reason I actually subscribed was to see how they delivered the service. However, after loving the first couple of tracks, I found myself hugely anticipating each month’s release: waiting to see how awesome the next track would be; what crazy artwork would accompany it; and how in awe I would be of Mike Ieradi‘s drum playthroughs! The talk on forums and general service provided made me feel like a part of the Protest The Hero family. Even though it was still the case that anyone could purchase it, you felt very much a part of what they were doing. So by providing this service they will undoubtedly have gained many returning customers who will be excited to see them on their next tour, and blindly support the release of their next album. Even if it has meant shutting out potential new customers, loyal customers usually contribute a vast majority of a company’s income, and PTH have certainly built themselves an army of loyal customers (fans).

However, this then raises the question of “If PTH already have such a dedicated fan base, why couldn’t they just release the EP the normal way and expect people to buy it?” This is a reasonable question, and it has to do with the fact that the band isn’t signed to a label. Labels usually provide an advance to an artist they sign, and the advance covers the costs of actually making the record. So without a label, the band would have had no money prior to recording the EP. This means that the band wouldn’t actually be able to afford to rent rehearsal and studio space; or hire recording and production engineers. Also, without the stream of income from touring or previous record sales (which are probably still owned by the labels that released them), the band would not have been able to afford to live alongside making the EP.

The other question to consider is, “why didn’t the band fund the EP via crowdfunding again?” The answer to this is probably down to branding. Protest The Hero are renowned for their virtuosic music, and the fact that all members are highly skilled at their instruments. Their songwriting is also remarkably creative, always finding new ways to use their material, pushing themselves and their abilities, along with boundaries of music structure, forms, and harmony. Protest The Hero are undoubtedly innovators in musical terms, but they’re trying to spread that further than just music, establishing a name for themselves in the way they make new records; their funding on indiegogo is one of the largest music projects to have ever been made using crowdfunding. This project keeps the band moving further in this innovative direction, rather than them becoming known as “The band that uses crowdfunding for everything”. However, they’ve used it as more than just a PR stunt, and managed to change the product creation method for music as well.

By releasing Pacific Myth in the way that Protest The Hero have, the EP has been delivered as a service, rather than a product like most albums are; encouraging fans to become co-producers of the record. With each song that was released, PTH were able to gain feedback from fans about what they liked and didn’t like. Towards the end of the process, the band actually asked fans what they wanted to hear/see on the final two tracks. This again builds the relationship with fans, making them feel like a greater part of the band, and the creation process; providing a sense of ownership with the record. It’s also worth noting that this method would yield rather different results if the band’s following weren’t mostly musicians. For most genres and bands, the fans are largely people who listen to music for the emotion, escapism or simply the enjoyment it provides. However, with many PTH fans being musically inclined, they would be able to articulate and suggest things they would like to hear in new songs.

This service oriented method also explains why Pacific Myth is an EP rather than an album. A year of writing and recording a 12 song album would probably have been too expensive; fans would have become disinterested; and it would prevent the band from earning via their main source of income, touring.

Overall, considering everything discussed, it seems highly unlikely that many other bands will release an EP or album, or at least one on this scale, via this subscription based method. It relies on the band fitting a set of very particular and unusual factors, that Protest The Hero happen to fit: an unsigned artist with a large, dedicated, musically inclined following, looking to produce an EP or short-length album. Other bands in other circumstances will have too many other easier, more convenient, less risky or more appropriate avenues available to them. However, it seems that Protest The Hero are one of very few bands that fit the criteria for this service based distribution method, and have made it work marvelously. Obviously, without knowing the profit/loss made on the venture, it’s difficult to say how successful it really was, but fans seem to love it, and that’s a large part of what matters.

Do I think it will catch on and be the future of music distribution? No, but I am very glad that Pacific Myth was released this way.

For more about the album, check out my review of Pacific Myth.

This Feeling Big In 2016 at Night & Day Cafe in Manchester