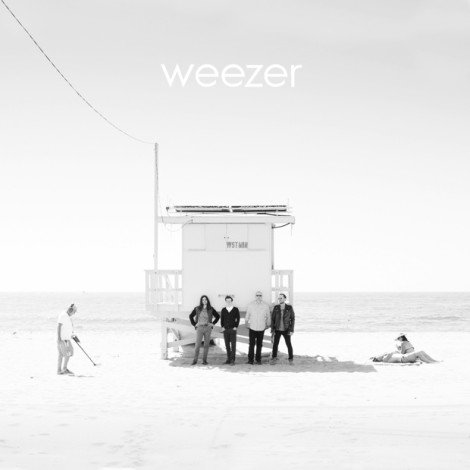 So April 1st finally came around and to much surprise, the long awaited, new Weezer album wasn’t an April fool’s prank! This is the 4th Eponymous album Weezer have released, following Blue (1994), Green (2001), and Red (2008), and their 10th studio album throughout their 24 year career. The White Album has a high standard to live up to, and it’s interesting to see if Weezer have been able to keep the album sounding fresh and exciting, or is it simply more of the same from this American Rock quartet?

Well, this album is undeniably following in the footsteps of past Weezer records, clearly flaunting the trademark Weezer sound throughout. The fat guitar sound; Cuomo‘s combination of whiny, high-pitched melodies with quirky entertaining vocals; this album is unmistakably a Weezer album.  This is somewhat expected from such an experienced band who have developed a knack for making a variety of styles their own. It’s almost like they pass tracks through a “Weezer filter” to ensure new songs are in-keeping with their own unique sound. Tracks like Wind In Our Sails display this feature tremendously. Despite having a soaring, catchy vocal melody in the chorus, it manages to incorporate interesting backing vocals and off-kilter counter melodies on the guitars to allow the track to sound anthemic rather than radio-friendly. It’s not just the music that this applies to either, with Thank God For Girls demonstrating that the lyrics are used in a similar manner. Cuomo stated that the title “Seemed like a big, mainstream-ish title but I knew I would be able to pull all kinds of weirdness out of it.”, and that’s exactly what he’s done. Were it written by anyone else, the track would surely have gone in a more obvious, mainstream direction with the lyrics, yet it showcases that “Weezer filter” again.

Unfortunately, with Cuomo openly admitting the subject matter of much of the album to be a widely clichéd, and exhausted topic; heavily inspired by The Beach Boys, it is unsurprising that no matter how quirky and different he made the lyrics, they lack a level of depth or insightful meaning that is an integral part of their sound. Hints of emotion and sentiment come through in some tracks; returning listeners to fond memories with lyrics about having good times with friends in California Kids, or longingly remembering a lost love in Jacked Up. These moments result in highlights on the album, where there is an emotional connection with the audience in the lyrics.

Furthermore, there seem to be certain tracks aimed toward being radio-friendly, and almost mindlessly enjoyable. Thank God For Girls may have quirky and colourful lyrics, but the music accompanying these is the sort that could be expected from many other alt-rock bands, and seems to have escaped the Weezer filter. This is the type of track that many die-hard fans cite as the downfall of the band; beginning to appear on the Make Believe album as the band became more radio-friendly. Thank God For Girls and King Of The World are certainly the least musically innovative tracks on the record, and somewhat lack the Weezer trademark sound, despite incorporating a number of key features. These tracks definitely have their place on the record for their ridiculously catchy, and endlessly enjoyable choruses, but they lack a musical depth when stacked against some other tracks on the album. Thankfully, there are relatively few of these compared to truly creative ventures from the band.

These creative ventures come in a variety of styles, and it seems that Weezer have incorporated a number of styles from the band’s past efforts. Be it King Of The World, with its big anthemic chorus reminiscent of Beverly Hills (Make Believe); Endless Bummer, the chilled out self aware track invoking memories of Island In The Sun (The Green Album); or (Girl We Got A) Good Thing, which could have been written by The Beach Boys (before being passed through a Weezer filter, of course), there’s something for both hardcore fans, and newcomers to the band to enjoy. This variety of styles is delivered in a highly accomplished and cohesive manner. Despite the array of styles, tempos and emotions conveyed, they all have that distinctive Weezer sound tying them all together.

Weezer have never been a band with outstanding technical ability, or one member who is the main focal point; everyone plays their part and contributes to the overall song. This record is no different, and oversees some tremendous songwriting and excellent transitions between different textures and harmonic sections. This feature is most notable in Summer Elaine And Drunk Dory, which indicate the tone of the track immediately with that comic whistle over the guitar line. Despite not having any outstanding parts, everything works excellently well together, complementing each other nicely. Sections flow together seamlessly, and the lyrics provide a funny anecdotal topping, bringing back the nerdy comedy moments of Weezer. There are of course some outstanding musical moments as well; the texture in the chorus of Jacked Up created between the staccato stabs on piano, beneath the high pitched vocals is brilliantly inventive. It demonstrates terrific songwriting, using a technique which is rarely used due to the soundscape it creates, but Weezer use it to their advantage, adding another dimension, and emphasising the sentiment in the lyrics.

Overall, Weezer have produced a great record with The White Album. The tracks are all very cohesive and expertly written, combining creative songwriting with catchy melodies. The band’s trademark sound is applied to all songs on the album, creating an impressively cohesive listening experience, and ensuring there are no weak tracks, and each one is very enjoyable. Ultimately, the album is nothing new from the band, who are flaunting the same sound as they have for the past 24 years. However it still finds new ways to surprise, bewilder and entertain, meaning that The White Album is incredibly enjoyable.

Standout Tracks: Wind In Our Sail/ Jacked Up/ Endless Bummer/ (King Of The World is incredibly enjoyable)

Amongst Thieves: March For The Sun