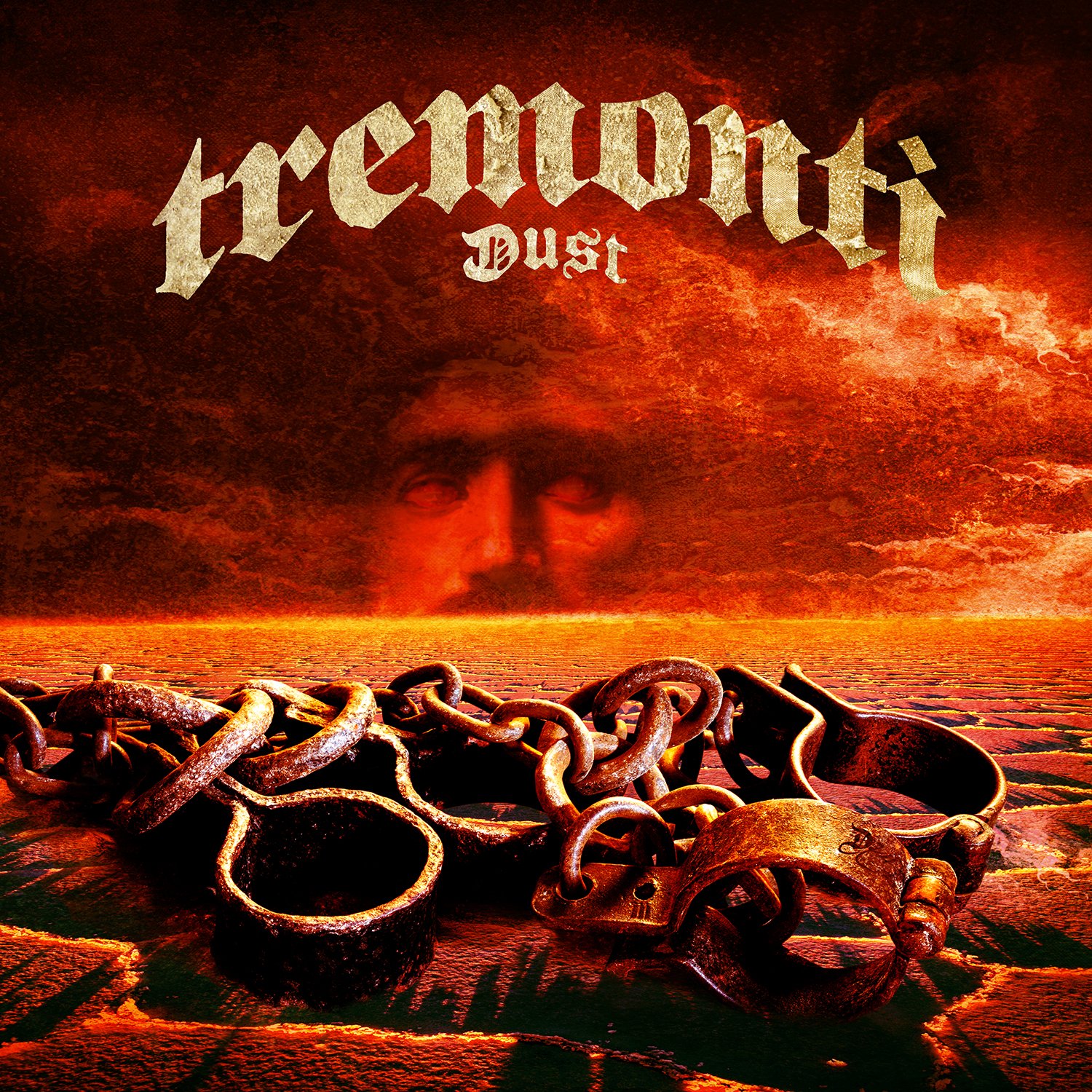 However, since his first solo effort “All I Was“ in 2012, Mark Tremonti has gone from strength to strength, bucking this trend and creating some incredible music.

Following the release of Alter Bridge‘s critically acclaimed Fortress in 2013, Tremonti‘s side project, Tremonti, released their sophomore effort, Cauterize. It received glowing reviews and a strong reception from critics and fans. Clearly dissatisfied with resting on their laurels, Tremonti are back for the second time in less than a year with their brand new album, Dust.

The two albums were written and recorded at the same time, and the success of Cauterize has led to the suggestion that this follow-up would just be a collection of B-sides. However, I’m happy to report that Dust is actually pretty freakin’ awesome, too!

How Does it Sound?

The band’s combination of modern thrash and melody constructs the basis of Tremonti‘s sound. However, Mark Tremonti‘s technical ability and unique sense of melody gives Dust a refreshing and distinctive sound.

Of course, everyone knows Tremonti as a guitarist first and foremost; the impressive riffs and solos he plays are synonymous with Alter Bridge. Thankfully, he’s brought the same high quality guitar-work to his own music too. And it’s ever present on Dust!

The guitar work provides the basis for a lot of what is excellent on the album. In terms of riffs, I don’t think there’s a bad one on the album!

Kicking off with My Last Mistake, it’s not long before your hunger for killer riffs is thoroughly over indulged! Yet that’s only the beginning, and the intro riff on Betray Me is another remarkable high point: technical, thrashy, melodic and heavy all at the same time, it’s difficult to recall a better riff heard this year!

And Then There’s The Solos!

Now, it couldn’t be a Tremonti album without face-melting solos. And of course he is more than happy to oblige! Arguably the best solo appears on title-track, Dust.

When the track begins to build up again out of the second chorus, we are only too aware of what is coming, and it suitably erupts out of the mellow section: well structured upon motifs; full of emotion and feeling; all while featuring Tremonti‘s trademark meticulously executed runs and ornaments, and a beautifully crisp tone. It leads perfectly back into the colossal final chorus, before being incorporated into the section for a climactic end to the song.

The impressive guitar-work isn’t limited to just riffs and solos though.

For example, while the main riff in My Last Mistake may take many plaudits, it’s the use of chords that facilitates a lot of the great work and links the varying sections. The unexpected descending chord progression, and incorporation of 7ths in amongst such heavy music create a distinctive and mesmerising soundscape. In this case, it also allows the track to seamlessly transition into the fantastic chorus section.

However, Tremonti aren’t content with the inventive use of chords to enthrall listeners. They change things up every time a section reappears in a song. This is in every song in some form, but perhaps most impressively in the second verse of Catching Fire. As awesome as the material was when first heard, it’s brought to life when it re-enters with a prominent dirty bass sound, before picking up the tempo, driving the song forward and then incorporating well-orchestrated stops to build tension and facilitate the move to the chorus.

It’s this manipulation of material which takes Dust from being a collection of great riffs, to being incredible songs.

The excellent work is not limited to the guitars either. Tremonti‘s vocal work is actually pretty great too. His unique sense of melody gives a clear point of differentiation between their sound and similar bands. And, although it can seem somewhat unusual at first, it really works!

There are, unfortunately, times where it doesn’t work too, most notably in Once Dead. The music is well-suited to a big melody in the chorus… but it just doesn’t really fulfil its potential and falls flat rather than producing a distinctive hook in the song.

Of course, some of this are down to the music simply not allowing these melodies to flourish, or even fit, as is the case with The Cage. The chorus here is fantastic, but the verse riff, based on blast-beats, leaves no space for vocals. So when Tremonti attempts a melodic line over the section, it sounds like it’s two conflicting ideas, rather than one collaborative one, as intended.

However, when it all comes together, it creates some really brilliant moments. The chorus of Tore My Heart Out is one of the standout sections on the album. The half time groove, along with the supportive chords and bass-work give the vocal melody room to flourish; soaring over the music and becoming a memorable hook. The lyrics here also discuss a relatable subject, and while the main line is quite repetitive, it’s another reason why the section stands out.

The lyrics in general, while not a key strong point, aren’t too bad, and those featured on Unable To See, are excellent. This is “the ballad” on the album; through-composed, growing as it progresses, with an impressive and emotional vocal performance that brings the touching lyrics to life.

Unfortunately, throughout the rest of the album, there are almost no eye catching moments of brilliance in the lyrics. This is arguably the biggest factor of disappointment on Dust, which says a lot about the album’s other qualities.

Because there are so few disappointing things about the album, when they appear, they somewhat standout. None of these issues are recurring, which suggests they were intentionally included, especially as the album seems so meticulously constructed.

However, they do detract from the overall song when they occur, as is the case with The Cage. The Cage has numerous outstanding features, aligning with previously mentioned good points on the rest of the album. However, the drastic and sudden change of tempo, rhythm, texture and tonality to move into the middle section is horribly out of place. This suggests that Tremonti were more concerned with ensuring the track has a kick-ass solo (which it does), than the construction of the song as a whole. These minor blips occur in several places on the album, but thankfully not all songs are affected.

This all means that, overall, Dust is a really great album. There are no especially bad songs, just a few that are less-well-executed, and of course, there are an equal number of outstanding songs. The impressive guitar-work, in terms of chords, riffs and solos, shape some of the key aspects of the album. Yet it is how they interact and are developed that takes the music to a whole other level, creating something truly unique and innovative. The album is every bit as impressive as Cauterize, proving that Dust is not just a collection of B-sides, but a fantastic Tremonti album to sit proudly alongside its predecessor, ushering in a new chapter of Tremonti.

Standout Tracks: My Last Mistake/ Dust/ Betray Me/ Tore My Heart Out

Death Of A Bachelor – Panic! At The Disco