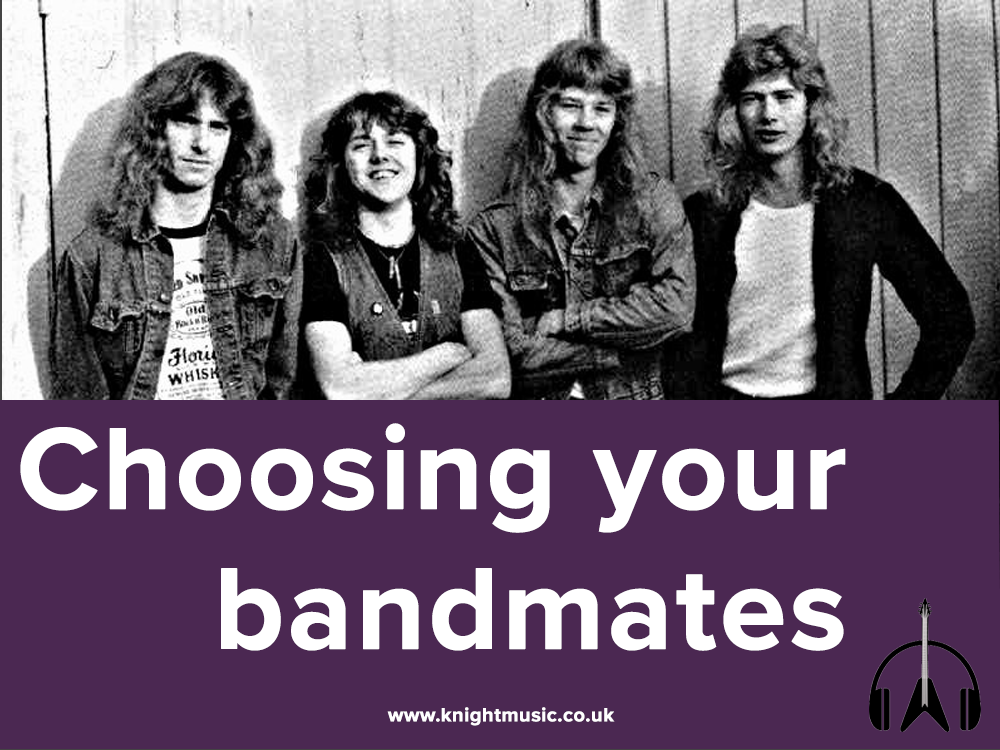 So this marks the first in the brand new series of “How To Treat Your Band Like A Business”. If you missed last week’s introduction to the series, check it out here. This first one is all about choosing your bandmates and personnel management.

You might be thinking “I’ll make a band with my friends”. While this is a common idea, it may not be the best.

There are a few bands that famously make it big with their best friends. However, even then, a lot of those are actually just half the band: AC/DC; Rolling Stones; Arctic Monkeys, are famously friends from school or siblings, but there’s only two or three in each band.

The others are hired based on musical talent, or other qualities they bring to the band. In actual fact there are very few successful bands built upon friendships. It’s usually the case that friendship comes after.

Metallica are a great example of this. They are now known as having a stable core over the past 40 years. They’re all friends, yet they met in Metallica. After Hetfield and Ulrich got together through a newspaper advertisement, the band went through 5 members in the search for the 2 that would go on to appear on the Kill ‘Em All. This doesn’t include Hetfield’s demo appearances on bass, or the probably countless auditions that will have taken place.

The search wasn’t simply aimed at who the best musicians were: Mustaine is one of the guitarists dismissed by the band, and is now a world renowned excellent guitarist! So what were James and Lars basing their decisions on?

The Importance of Musicality & Taste

Well, what Mustaine had that others lacked, firstly was musicality and a similar taste in music. There were not a lot of people at the time wanting to play the music Metallica wanted to make, with many taken over by the hair metal scene in LA at the time.

Cliff Burton shared similar tastes in music, but was in one of these hair bands at the time. James says that he saw Cliff at a gig and loved his use of the Wah pedal on bass. James and Lars approached Cliff straight after the show, and he accepted because of the type of music Metallica wanted to play.

Also, they were looking for people that matched their drive and desire to succeed.

The Need for Driven Bandmates

It’s evident from how Lars formed the band, that he was incredibly driven in his pursuit of the band becoming more than just a hobby. Before Hetfield even replied to the newspaper ad, Lars had already spoken to Brian Slagel about having a song on the Metal Massacre compilation. This demonstrates Lars’s determination to succeed, and the type of person he would have wanted in the band with him.

It’s also one of the key attributes I think band members must have in order to go the distance. For example, Lars may not be the best drummer, but he was filled with drive to succeed, network, get the band going, and get the name out there. He was more than just the drummer in Metallica, he was always looking for opportunities to move the band forward.

The kind of things you and your bandmates should be doing will be discussed in the next episode, but this drive, and desire to succeed and make it big is crucial.

So many bands get to the initial stage of touring round the country for weeks on end, and just realise “I’m not even making minimum wage doing this, what’s the point?”. You need people that are so committed that they don’t give up during that time.

And ultimately this is why Dave Mustaine didn’t make the cut in Metallica. He is currently known as the driving force behind Megadeth, it’s essentially his band, and so the notion that he didn’t have the drive or ambition to succeed seems ridiculous, right?

Of course, back then Mustaine had substantial drug abuse problems, and these interfered with him putting the band first. They made him late for shows, mess up on stage, and it held the band back rather than driving them forward. The other members of Metallica have never really had drug issues. Not that they were without their vices, being labelled “Alcoholica” by the media, clearly they never let this interfere with their goals though.

What Can You Learn From This?

As much as you need driven and committed people, you also have to be able to get along with them.

These are people that you will spending countless hours with in cars, vans, or busses; hanging out before and after shows; sharing hotel rooms; spending months with in the studio to record an album.

So it’s essential that, while you may not select your best friend, you need to be able to get along with everyone in the band. Ensure they’re open to dialogue about improving themselves, and ensure they’re happy to give opinions on what’s going wrong in the band, suggesting new ideas. Essentially, you need to make sure you can work with them on a daily basis, without them driving you crazy.

Following the death of Cliff Burton, Metallica needed a new bassist, and a lot of the reason they chose Jason Newstead was his personality.

Loads of people auditioned for the role. It was not long after the release of Master Of Puppets so Metallica was a well-known name amongst metal fans.

So for the band, the auditionees needed more than to just be able to play the songs. In Metallica’s eyes, Cliff would probably play it better anyways! The reason they hired Newstead is because he along with the whole band. At that stage it was less about trying to drive the band forward, they had a manager and basically a whole team helping them in that regard and opportunities were almost thrown at them. What they needed was someone who they could get along with on the road, and in the studio, and Jason fit that description.

The final thing is that you should never be afraid to dismiss a member of your band.

Of course it means teaching new people your songs. And that’s a hassle. But if there’s a band member dragging you down, holding the band back, making life difficult for the band, or if they simply have contradicting ideas; it’s going to be for the best for the band’s sake.

I would of course advocate for giving them a second chance. Make sure they know what you want from them. Even if it means spelling it out clearly, giving specific directions and following up on their progress on certain tasks. You could see a dramatic turnaround in behaviour, and really see their passion and desire to succeed come out.

And just think, neither Metallica or Dave Mustaine would be where they are now had he not been fired. This is of course a rare example of both parties succeeding, but it can happen, and it could be the wake-up call needed for the member you’re dismissing.

So, there are really 3 things to look for in potential bandmates when starting a band:

The final note is to not be afraid of discussing any of your issues with them. If you feel like a band member needs to improve in any of the areas discussed, talk to them about it. Then, if they fail to improve, do the best thing for the band and get rid of them.

So there you have a comprehensive guide of what to look for in potential bandmates. As you can see, it’s a lot more than how good of a guitarist they are. Make sure you’re following these as a guide to being a good bandmate too. You want to be someone you’d want in your band.

If you liked this post, check out the rest of the site for more helpful tips!
And If you want to learn more about treating you band like a business, be sure to subscribe for an update when the next installment comes out!

In the next issue in the How To Treat Your Band Like A Business series, we’ll be looking at what sort of roles you and your bandmates should be filling.

Have Protest The Hero Found The Future Of Music Distribution?